Places must to see that near Hop-On, Hop-Off bus stop.

A 1.5-tonne bomb with an intact fuse was successfully removed from the Red River in Hanoi at 1.p.m on November 28.

The Capital City High Command on Sunday concluded that an object found near Long Biên Bridge’s abutment P13 was a bomb left over after the war.

Functional forces are now coming up with solutions to salvage and disable the bomb.

The unexploded object was detected by local residents and reported to Hà Nội Committee of Traffic Safety on November 17.

According to the Inland Waterway Department, the 2m-long bomb is located 5m from Long Biên Bridge’s abutment P13, at Hồng (Red) River’s Km183. Its diameter is about 0.5-0.6m.

Saint Joseph Cathedral, located at 40 Nha Chung street, Hanoi, is a Roman Catholic cathedral with neo- gothic style, which was built about 120 years ago.

Saint Joseph Cathedral, located at 40 Nha Chung street, Hanoi, is a Roman Catholic cathedral with neo- gothic style, which was built about 120 years ago.

In 1882, after the French army conquered Hanoi, the cathedral was constructed and completed in 1886. The cathedral and Nha Chung area were built on the land formerly belonging to Bao Thien pagoda, which was built under Ly dynasty.

The architecture with domes of the cathedral follows the Gothic style and design of Paris Cathedral. It is 64.5m in length, 20.5m in width with two bell towers of 31.5m-height. Though the appearance of the cathedral, from the doors, the colorful window glass, to the religious paintings for decoration follows Western style, the main interior part is decorated in Vietnamese way with two typical colors yellow and red. Outside, in front of the cathedral is the statue of Mother Maria.

The first Christmas took place in the cathedral in 1887. Since then, the cathedral is always crowded with hundreds of people including both Christians and non-Christians at the weekend or during religious holidays like Christmas.

Today, taking advantage of beautiful architecture and good venue at the center of the city, the area surrounding the cathedral is always packed with hundreds of local people and tourists hanging out with friends for drinking, talking, and watching the street.

Nha Chung Street now becomes the “Lemon Tea” street, a popular gathering place to many youngsters in Hanoi, and home to eye-catching souvenir shops and Western style restaurants. It is not only the holly place for Christian couples hold their wedding, but also a great venue for non- religious grooms and brides to take nice wedding shots.

How to get there

From Hoan Kiem Lake head to Hang Gai Street, keep going until you reach Ly Quoc Su Street on the left hand side. Walk pass Ly Quoc Su and you will reach Nha Chung – the Cathedral is the connecting point of these two streets.

Located within Hanoi Old Quarter, the ancient house at 87 Ma May street which was built at the late of the Twentieth century, is quite intact with typical architecture of ancient houses on Hanoi street.

Located within Hanoi Old Quarter, the ancient house at 87 Ma May street which was built at the late of the 20th century, is quite intact with typical architecture of ancient houses.

The house consists of two main blocks linked together by a square yard in the middle on the ground floor, and a small balcony on the 1st floor. The yard is included at the centre of the building to moderate the air, provide the house with sunlight and cool winds. The balcony above is an ideal place to put small plants, flower pots for the owner’s interest and relaxation.

The room on the ground floor which is street- front is used for selling goods, and the room on the next floor is living room to host the guests and worship the ancestor also. The room which is behind and linked to the living room by a balcony is bed room. On the ground floor, all behind space is for production activities, then kitchen and bathroom.

All of the walls in this house were painted with typical yellow color like other ancient Hanoi houses, and all furniture, decoration items are reserved in good condition. Though being restored in 1999, this house still remains real and ancient beauty of itself.

Today, the ancient house is open for tourists to come here and see how ancient Hanoian lived, enjoy as well as buy some Vietnamese traditional decoration items, souvenir.

How to get there

The ancient house sits at 87 Ma May street, a popular street in Hanoi Old Quarter. You can easily walk there for less than 10 minutes from Hoan Kiem lake.

Located on a small penisula on the East side of West Lake, Tran Quoc Pagoda is regarded as the most ancient pagoda in Hanoi with its history line of more than 1,500 years.The architecture of this Buddhist center is a subtle combination between the solemn and beautiful landscape on the peaceful and quiet ambiance of West Lake’s surface. Thanks to these historical and architectural values, Tran Quoc Pagoda attracts many tourists to pay a visit, both inside and outside of Vietnam.

Tran Quoc Pagoda was first erected with the name “Khai Quoc” (Opening a country) during King Ly Nam De Dynasty, between year 544 and 548 on the bark of Red River (approximately within Yen Phu Ward, Tay Ho District now). Till the 15th century, during King Le Thai Tong reign, it was renamed to “An Quoc”, which means a peaceful country.

In 1915, due to a serious landslide ingrained into the pagoda’s foundation that made the incumbent government and people to move the whole construction to Kim Ngư Island on the East of West Lake, and this is Tran Quoc Pagoda’s current location that you can witness in this day and age.

The renaming process didn’t stop until it was changed to the name “Tran Quoc Pagoda”, meaning protecting the country, during King Le Huy Tong dynasty (1681-1705). Through each name of the pagoda, we can see a milestone of the country as well as the wishes of its people attached to this holy sanctuary.

Famous for stunning scenery and sacred sanctuary, Tran Quoc Pagoda used to be a favorite sightseeing place of many kings and lord of Vietnam, especially during festivals, full moon days or Tet. Up until now, the pagoda can still preserve its fame although the landscape has been affected by urbanization.

Besides the front gate facing the crowded Thanh Nien Road, this 3,000m2 complex is surrounded by sliver tide of West Lake, and is designed according to strict rules of Buddhist architecture with many layers of buildings and three main houses called “Tiền Đường”, a house for burning incense and thượng điện. These rooms are connected with each other to form a Công script (工).

The precinct of Tran Quoc Pagoda is highlighted by a high stupa that you may recognize from a far erected in 1998. This stupa is composed of 11 floors with a height of 15m; each floor has a vaulted window holding a statue of Amitabha made from gemstone. On the top stands a nine-storey lotus (Cửu đỉnh liên hoa) and is also gemstone. This stupa is situated symmetrically with the 50-year-old Bodhi tree gifted by former Indian President on the occasion of his visit to Hanoi in 1959. Abbot Thich Thanh Nha of Tran Quoc Pagoda explains the meaning of this correlation: “The lotus represent Buddha while the Bodhi is a symbol of supreme knowledge”.

Not only that, Tran Quoc is also a small museum of priceless antiques dated thousands to hundreds years old like worshiping statues in the front house. These statues are all engraved and polished meticulously by skillful craftsmen, which all bear spectacular features. Among them, the outstanding one is the statue “Thích ca thập niết bàn”, which is evaluated as the most beautiful statue of Vietnam.

With all the historical and architectural values it possesses, Tran Quoc Pagoda is not only worth visiting as a sacred sanctuary of Buddhism attracting countless Buddhist believers; but also an indispensible destination for cultural explorers to Vietnam.

Hoan Kiem Lake in Hanoi attracts tourists and locals looking to get away from the noise and frenetic pace of the city. Peaceful and quiet, the lake surrounds Ngoc Son Temple, a pagoda sitting in the centre on a small island. The temple attracts many visitors and was built in commemoration of the 13th century military leader Tran Hung Dao who was renowned for his bravery in the battle against the Yuan Dynasty. Homage is also paid to scholar Van Xuong and Confucian master Nguyen Van Sieu. The island on which the temple is built is known as Jade Island and is accessible by the iconic Huc Bridge or Rising Sun Bridge which is a charming scarlet-painted wooden bridge of classical Vietnamese design. The pagoda is also guarded by two towering posts decorated with Chinese writing. The lake and temple are probably the most famous place. 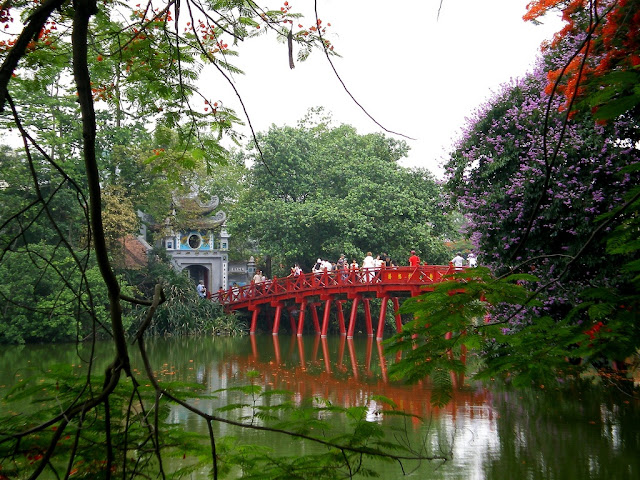 Ngoc Son Temple was built in the 18th century on Jade Island in the centre of the ‘Lake of the Returned Sword’ or Hoan Kiem Lake. Legend describes how an emperor was once given a magical sword which helped him defeat the Chinese Ming Dynasty and in doing so saw the return of the Golden Turtle God to the lake. Today ‘Turtle Tower’ stands close to the lake in memory of this legend. There are also endangered large soft-shell turtles swimming in the lake, and to see one of these gentle giants is considered very auspicious. The name of the temple translates to ‘Temple of the Jade Mountain’ and is predominately dedicated to war hero General Tran Hung Dao who defeated an armed force of 300,000 soldiers sent by Mongolian Emperor Kublai Khan in the 13th century to invade Vietnam. Also inside the pagoda are a large bronze bust and other deities. There are altars dedicated to Tran Hung Dao, some ancient artefacts including ceramics and a preserved specimen of a giant turtle found in the lake weighing 250kg. 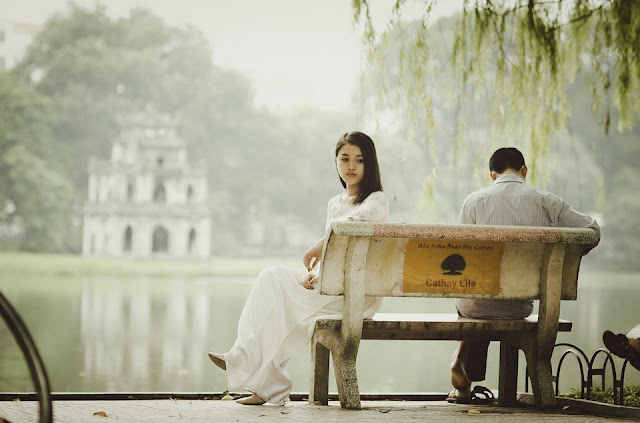 Hoan Kiem Lake The lake and the temple offer plenty of trees and shaded spots in which to escape the busy city streets. To get there head towards the Old Quarter and the main post office which is located next to the lake. Tickets are purchased at a booth located on the left-hand side before you cross the bridge. The temple opens at 08:00 and closes at 17:00 every day and its best to get to the lake as early as possible to watch the locals do their morning yoga and Tai Chi. To get to the temple, walk across the flag-lined bright red Huc Bridge across to Jade Island. 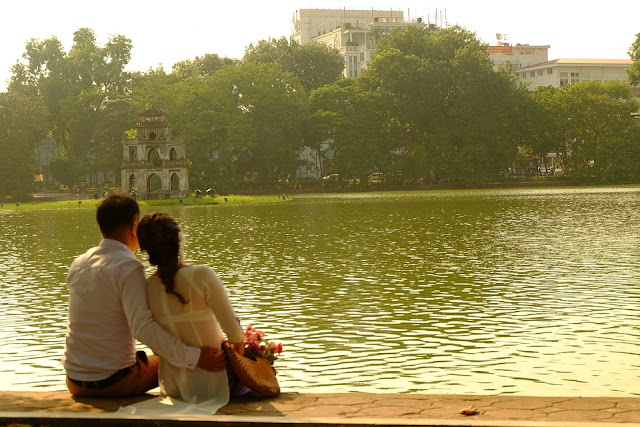